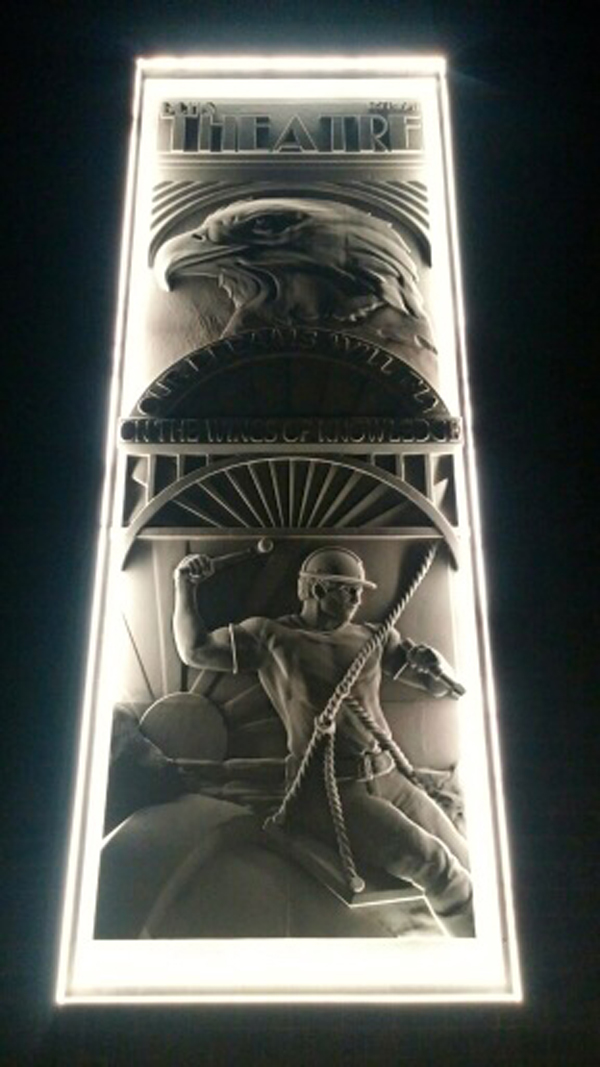 Artist and longtime Boulder City resident Connie Burnett-Ferraro expressed her love for the city in her winning design for a new art centerpiece at the high school.

The contest organized by Boulder City High School was to honor the school’s history and mark its future by designing a cornerstone piece for its new theater.

Burnett-Ferraro’s design incorporated all of the required elements for the contest — history of the school, construction of Hoover Dam, and the school’s mascot, an eagle.

“I wanted to do an art deco eagle but wanted to keep it their mascot,” she said.

BC ARTIST CONNIE BURNETT-FERRARO GIVES GLIMPSE INTO HER NEXT, MOST AMBITIOUS PROJECT EVER! 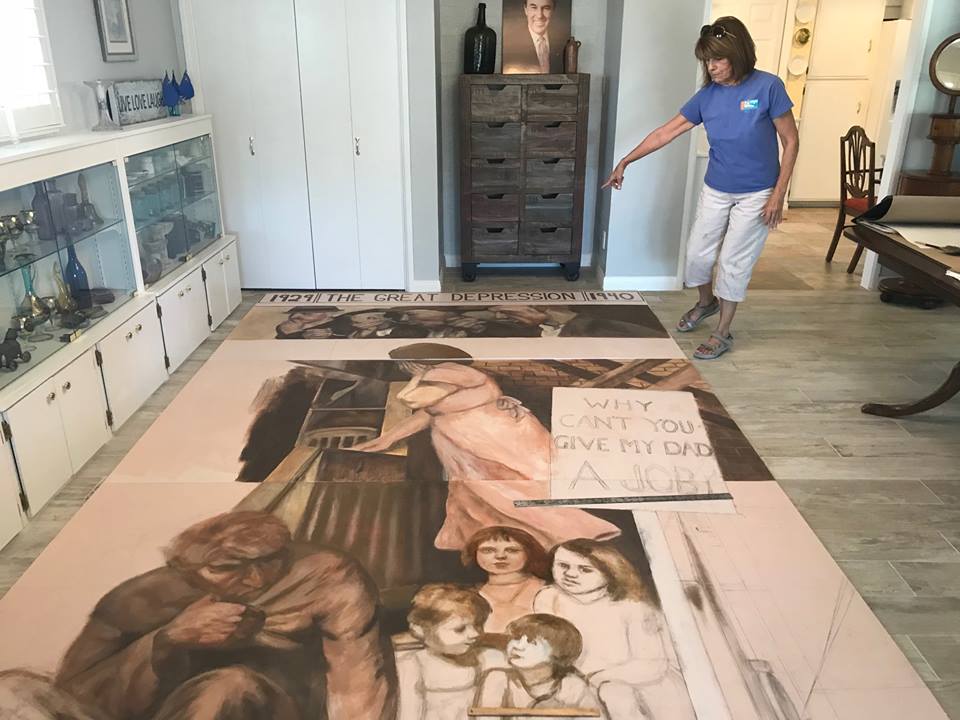 She is not only our former first lady but, an accomplished Broadway dancer and artist extraordinaire! You can see nearly 30 of Connie’s works all over town… from the high school, the Antique Mall, the Boulder Dam Hotel to Goat Feathers Emporium. Connie can’t hide the thrill over her current project. “I’m so excited, I can’t tell you!”

Well, actually she can. You can see the pictures below. Connie is creating artwork to be displayed on the entire side wall of the old Vons building… new Medolac building… facing Boulder City Parkway. That’s 116 feet wide and 16 feet high! The owners of Medolac, a human milk processing company, have given Connie carte blanche on what she wants to create. She has been working tirelessly at her home. She is creating 58, 4X8 panels of Boulder City history. She is letting us see the first few panels, that she is working on…

But wants to keep the rest.. her sketches.. a secret until the unveiling. She says it will probably take a few more months to complete. The panels on her sections will become more colorful as time goes by. The first section, showing the dire American economy, which forced many people to come to Southern Nevada looking for work, will be in the Sepia tones.. which is the color of old photographs. As the construction of Boulder Dam begins and Boulder City takes shape, the colors on Connie’s art get brighter. “It’s like a history lesson,” says Connie… “especially for the young people. They don’t know what happened, and it’s great to see it in a mural.” 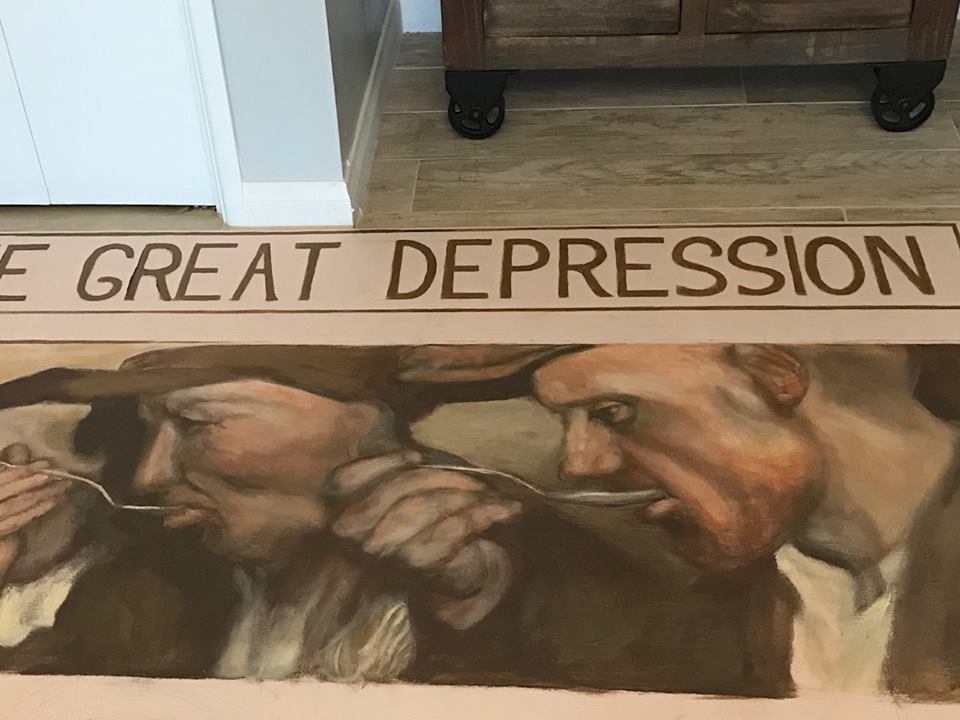 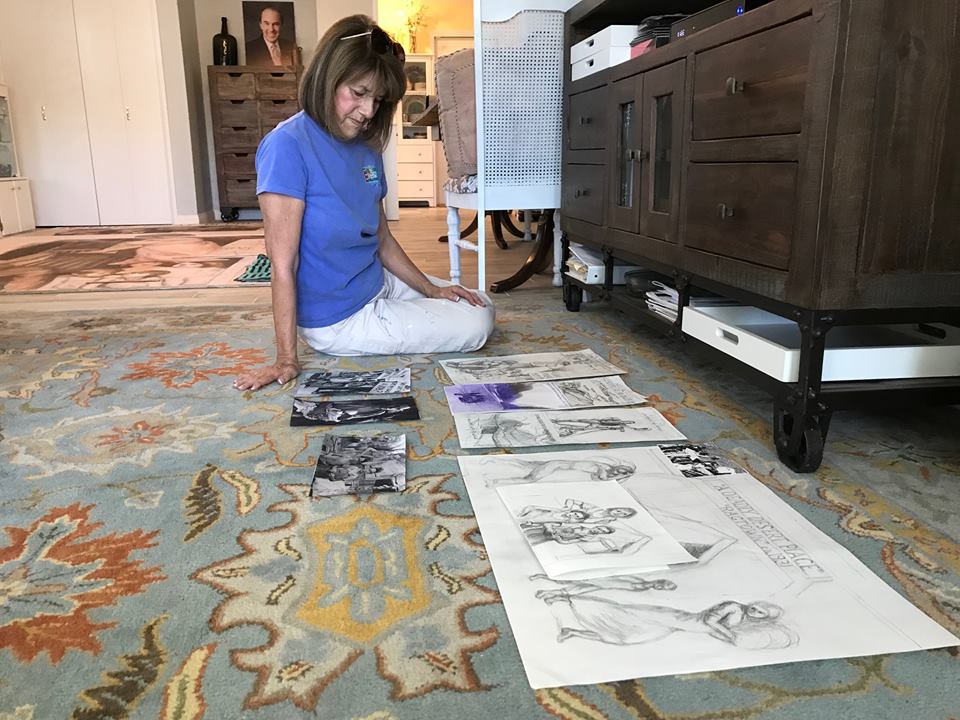 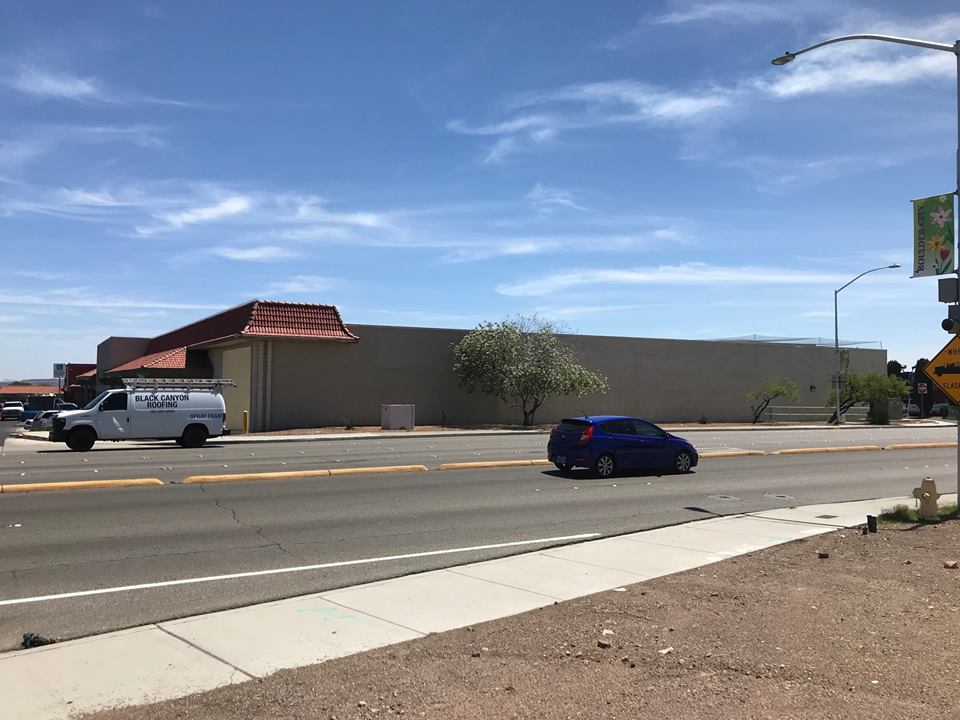 Artist and longtime Boulder City resident Connie Burnett-Ferraro expressed her love for the city in her winning design for a new art centerpiece at the high school.

The contest organized by Boulder City High School was to honor the school’s history and mark its future by designing a cornerstone piece for its new theater.

Burnett-Ferraro’s design incorporated all of the required elements for the contest — history of the school, construction of Hoover Dam, and the school’s mascot, an eagle.

“I wanted to do an art deco eagle but wanted to keep it their mascot,” she said.

Burnett-Ferraro worked on the piece with Gary Baldwin, who came up with the logo portion of the design.

“It was just spontaneous, and it just worked,” she said of their collaboration. “I’m very honored because that’s my love.”

In her frieze, Ferraro also wanted to highlight the strength of the construction workers and the blood, sweat and tears they put into their work. She hoped that the design would take people back to the time when the workers were building the dam with their energy, strength and determination.

“The committee felt that this design incorporated community significance, historic school relevance and the school mascot utilizing the art deco style,” she said.

Wagner said the construction company is currently working on the frieze design and it will be installed later this year.

Burnett-Ferraro has been artist for a long time and enjoys doing portraits, being outside and painting, and creating murals.

“I love doing murals. I jumped at the change when I saw this,” she said of the contest.

“My father was a painter, and I was always drawing,” she added.

The contest asked artists to create an art deco frieze, a broad horizontal or vertical band of sculpted or painted decoration. It was open to anyone in the community, including individuals and groups.

Connie Burnett Ferraro sits Thursday in front of the mural she’s painting on the Desert Sun Realty building on Arizona Street in Boulder City. Weeks in the making, the mural features historical landmarks and prominent people of the city, and joins other murals the artist has done on interior and exterior walls across town.

Connie Burnett Ferraro may be best known as the wife of former Boulder City Mayor Bob Ferraro, but for the past several years the one-time professional dancer has made a name for herself as a hometown muralist. Her work can be found on several exterior and interior walls in Boulder City, including the length of Darwin’s Auction House at Yucca Street and Nevada Way on the way into Boulder City.

Can you tell us about your life as a dancer?

After high school, I went to New York City. I didn’t know anybody. I was very, very shy. I don’t know how I had the guts to do that. I started doing auditions, and I got into a tap act with Ted Lewis in a vaudeville show. We toured all over the United States. I did a lot of Broadway and a lot of TV, you know, variety shows. I did sing on “The Ed Sullivan Show” by myself. I had one line. This is my claim to fame.

How did you get into art?

While I was dancing, I started going to the Art Students League. I studied on and off for about nine years.

Why did you decide to leave New York?

What about your first mural?

The Where on Earth rock shop had a contest for somebody to come up with a poster of the history of Boulder City. There were only five entries, and three of them were from children. I won and got $200. They were going to have somebody put it on the side of their wall, but it didn’t happen and it didn’t happen. I said I can try it. I had no idea how to put it on a wall. I didn’t know about gridding. So I got to a point where there was this huge space. That’s why that mountain sheep is up there. And I’m scared of heights. I was holding onto the wall. It was horrible.

Did being the mayor’s wife affect your art?

When you walk around Boulder City and see your work, what do you think?

I see things I’d like to paint over — like the bowling alley one, that’s my worst one. I went in and said, “Please just paint over this.” It’s all faded. I would even do it for them.